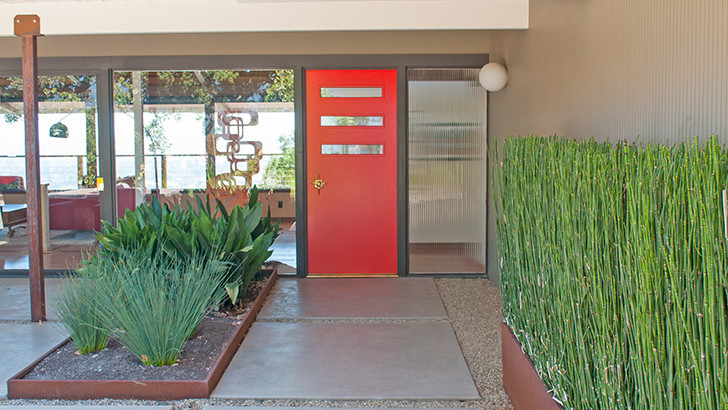 Over the last 4 years, we had the front door painted a bright red. But we always wanted to do something more ‘MCM’ with it. We thought we would be replacing it eventually, but our contractor warned us that the measurements were odd and he would have a tough time fitting in a brand new door. The fact that it was a solid – we think– mahogany, we didn’t want to replace it if we didn’t have to.

Here is the front door soon after we bought the house: Notice the small window on the right, which we had removed, as well as the door to the garage. I’m gagging a little looking at these.

So THIS has been our door for the last 3 years. We had it painted Merlot Red, and added chrome mcm door fixtures from Rejuvenation. I have no idea WHY there was a peephole…

But we noticed that a lot of MCM front doors had window inserts, and that’s what we decided to do. We ordered a DIY window kit from The Millwork Market. (Great company to do business with, by the way! ). We chose reeded glass, as the window to the right of the door is also reeded. Then we had our contractor do the cutting and installing.

Once they were installed, we had the door sent out to our painters location to be sanded down and painted again. This time we went with an even brighter red – Benjamin Moore Redstone. But it gets better. When they took the door out, they asked us if we wanted the fixtures cleaned up as well.  From the photo above, it just looks black. Well, it turns out the hinges and footer were solid brass – and our painter knew a guy who could clean them up.

We had one problem with the window inserts. We couldn’t fit 4 as we originally planned because of the proximity of the door handle. Rather than having the spacing uneven, we opted for 3 above the door handle. Interior shot of the door before. That black metal footer is no longer black! The reeded glass insert up close. Something is missing, though. What do you think? A fabulous but expensive bullet planter in the corner? Welcome to The Napa Project, where I write about our five year remodel of a mid century home in Napa, California.
Great dinner at @cucina.paradiso !

Mountain biking does a body good! California may b

Feeding the horses at sunrise.

The fire pit lives on! Yep, we are back in Califor

Can’t tell if Vinnie is helping fill the water t

Just another day in paradise 😳

The finches love my hanging pots. And when I say l

No, it’s not snowing in South Carolina! A little

🇺🇸 Hey @onepeloton , This is how you celebra

Sunset over Vino Acres. What a day…#thankgoditso

Butterfly bushes we planted in the back garden are

Giving thanks for this beautiful country I get to

Good day for a ride. Jasper is sporting that wind

That moon last night! Accompanied by our friend -

We planted 10 rose bushes. This is #peacerose

This beautiful finch lives in our barn and serenad