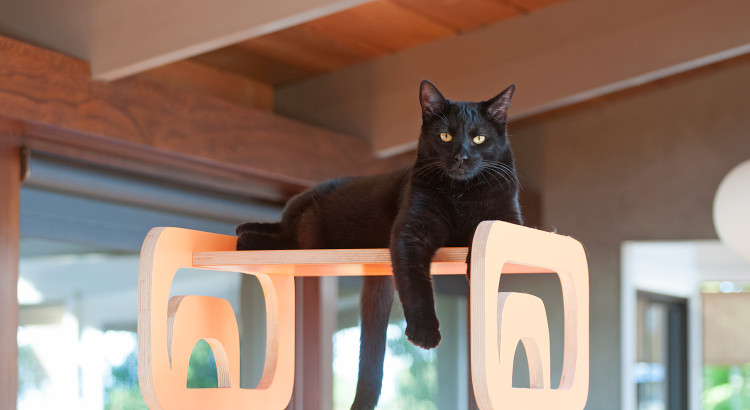 I have neglected to mention our newest member of the family. This little guy showed up in our courtyard about a week after the earthquake that struck last August. I still don’t know how Shawn heard him because we were in the living room watching TV. All of a sudden Shawn mutes the TV and exclaims ‘I hear a cat!’. Thinking it was one of the neighbor cats that likes to visit I was not all that concerned. But then I heard it, a high pitched mew that can only come from a kitten. And then we saw him, a black spot of a thing, frantically crying at the courtyard window, desperate to get in. We had to oblige 🙂

Into our garage he went away from the other cats. And within minutes the skinny runt was chowing kibble like his plane was going down. When he FINALLY had eaten enough he promptly climbed onto my lap and fell asleep. (And into my heart)

At that point we hadn’t really decided if we would keep him (although Shawn said he knew as soon as we brought him in the house) but we took him to the vet as soon as we could to get him checked out. He was estimated to be about 3 months old. And infested with fleas. Yuck.  After starting him on his vaccines, we took him home, gave him some flea medication, and made a home for him in the bathroom. The next day, I entered the bathroom and was bombarded with more flea carcasses than I could count. Everywhere! How did so many fleas come off such a little cat?!?!

After posting on Next Door, our neighborhood website that we had a lost kitty, no one claimed him. We’re not sure whether he was dumped off or was from a barn cat litter and made his way up our hill from some of the farms and wineries in the Coombsville area east of our house.

He was such a sweet personality, we decided to keep him. Yep, we’re the crazy cat couple with <cough> four <cough> cats.

Pretty soon, he was fitting right in with the other cats.

Benny showed him how to look at birds… And most importantly, how to nap. Here he is almost a year later, minus some boy parts and with a much bigger belly! He loves to chase my mouse pointer. I never thought I would be saying anything positive about the Napa earthquake, but it somehow brought us this little guy.