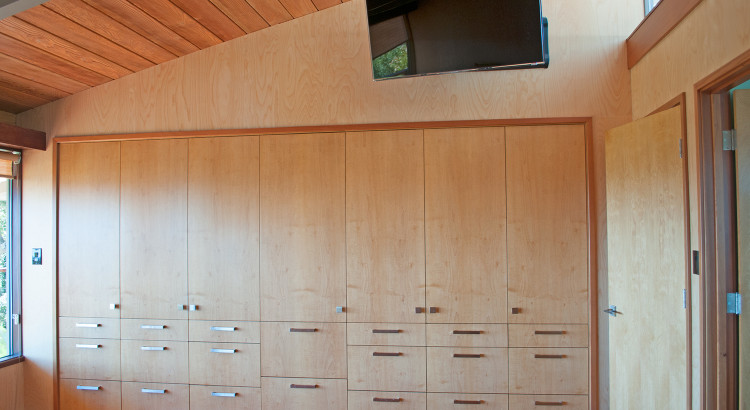 This master closet has had a few incarnations over the past 4 years. It was initially 2 dark closets with built in drawers. I can’t find a picture of the built ins, but you can get an idea of how dark the closets were. The hole in the wall was for a giant tube TV. No flat screens back then! We initially had the built ins removed, cedar flooring added Notice the mismatched paneling. That was a replacement piece and no matter what our contractor tried he could not match it up to the old. It was dark, discolored, faded and had lots of holes. These built ins were just -ok. The drawers were too small for my tastes and there was not enough space for all my shoes.

I hated those mirrored doors with a passion. So I covered them up with a bit of wallpaper glue and grasscloth. That was short lived because in hot weather, the grasscloth would fall down!

So after 4 years I give you the last version of the master bedroom closets. The cupboards were custom built and I call it our “Wall ‘o’ Drawers”. We chose birch wood and they were sealed/stained with a custom blend. Trying to complement all the different wood was tricky but I think it turned out nice. Lots of room for clothes – and shoes! (I’m showing you Shawn’s side though because he is a hell of a lot neater than me!) Another job we had done was having a finish put on the redwood ceiling. Not a varnish – but a clear sealer that did not give off too much of a shine. I am really happy with how it turned out. The ceiling now looks ‘finished’ and shows off that wonderful redwood. You may recall that after we had the ceiling sandblasted, I was not happy with the raw, pitted look.

The rest of the bedroom has seen a lot of changes. Some of you may recall it originally had an atrium on the deck. The atrium is long gone, as is that hideous automated curtain. We had all wood trim re stained and sealed as some parts had become discolored over the years and there were huge variations in color. And finally – a platform bed! Our bed isn’t a foot higher than the nightstands anymore! We purchased this bed at Scandinavian Design in Santa Rosa for 450 bucks! Eat your heart out Design Beyond Reach! We also purchased the 8×10 rug there as well for $799.

Now for those walls. As you can see, there is a lot of blank space. Over the credenza I’m thinking a large metal wall art and over the bed, a large bright painting. I think I need a plant in the corner, too. What do you think? I’m open to suggestions!

3 thoughts on “The Many Lives of the Master Bedroom Closet”