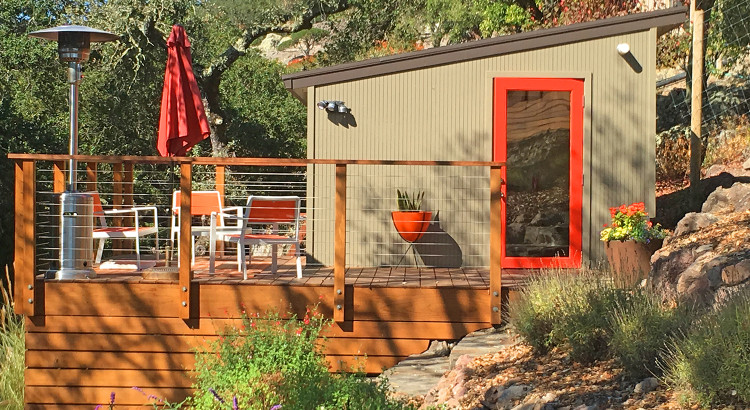 The term ‘shoffice’ appears to be the new buzzword as many homeowners turn their sheds into home offices and that is exactly what we did.  Or should I say ‘Shawffice’ – since it is Shawn’s office? In the last year we finished things off as I will show below. The interior was full of spiders and was damp and moldy. Two of the oaks had to be taken out because they were dying and in danger of falling down.

Once that was done, the inside was cleaned out. Then, it was gutted. A new concrete base floor was laid. Next, wood floor installed and a wooden covering for the stone on the right wall. Plus, a fresh coat of white paint. That was the state of the shoffice from 2012 until this year. The front had a lot of broken concrete from the removed tree so we decided to add a deck. We also added a new door with a window. I like to think of it as a mini version of the house! And before I forget – something I have neglected to add in past posts is that we had the ‘Eichlerondacks’ painted a retro blue. I bought a matching umbrella and table from Cost Plus. 8 thoughts on “The Shoffice”

Welcome to The Napa Project, where I write about our five year remodel of a mid century home in Napa, California.
Perfection