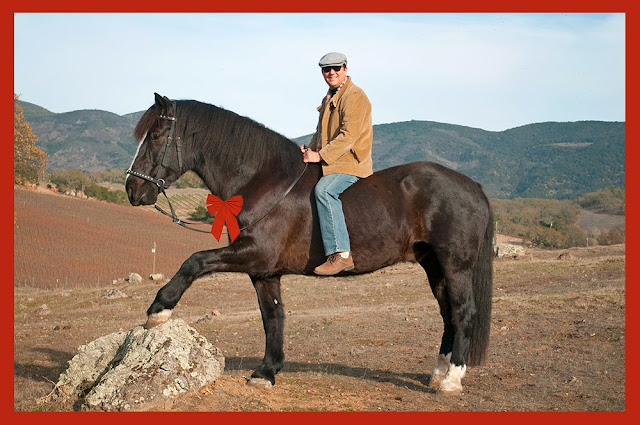 Merry Xmas and Happy New Year from
Us to You!

Did I mention my husband is a bit of a ham? He has only been on Jasper twice before, but he just hopped on bareback in the pasture, no problem. My two hunks!
A little background on Jasper – he is a draft cross from Canada that I have owned since he was a yearling. He is 8 now and 16.3 hands tall. He was born from a pmu mare owned by ranchers in Manitoba (if you don’t know what the pmu industry is, you can google it, but some pictures are not pretty). They lost their contract and all of their mares, over 100, were going to auction and most likely slaughter. Luckily, they were rescued before this happened and they all moved to a ranch in Alberta. Turns out 50 of the mares were pregnant. Jasper was the first born, at midnight in a snowstorm. Thus his full name, Midnight Jasper (named after Jasper, Alberta).
He was practically wild when he first arrived.  Since then, this horse has taught me patience, humility and completely made me rethink my previous understanding of how to train a horse. I’ve been told over the years that he was ‘lazy’, ‘dull’, and had a bad attitude. Who would have thought that with a lot of time and love, these so called experts would be proven wrong time and time again. I’ve been lucky to have a supportive husband, whom at times was my only cheering section. Nowadays Jasper is learning tricks and is so good at them,  I can’t come up with new ones fast enough! Under saddle, my so called lazy and dull horse is not only peppy, he’s soft as butter!

It is the same thing with this house. For the longest time, it was misunderstood. 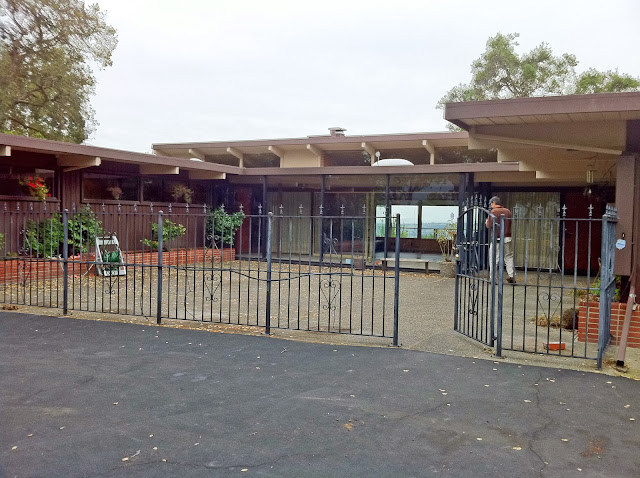 This modern gem had some bad renovations over the years. A solarium and atrium added to keep the outside out. It was neglected, called a dump, a teardown, and that someone would just buy it for the view and build a ‘mcmansion’ on it.

All it took was someone to see the potential, of what was…and what could be, with a little TLC.