I’m excited to show the rest of the cleaned up and planted property and exterior of the house, so here goes!

The south side. Another area that was originally a complete mess. It was so messy, you couldn’t see the view!
Before 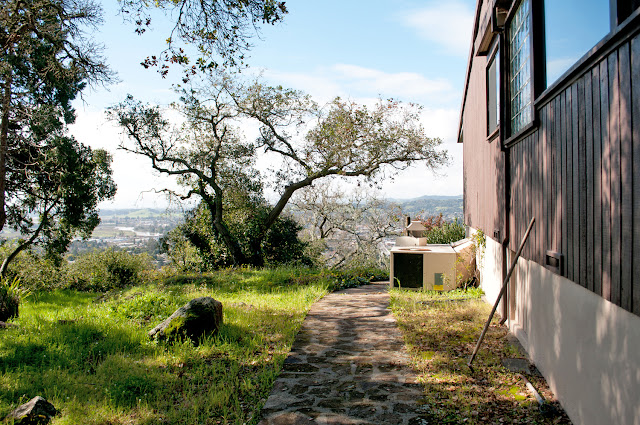 ﻿
After:
Jungle removed!  We planted fruit trees on this side, thus the cages until they are tall enough that the deer don’t devour them.﻿ 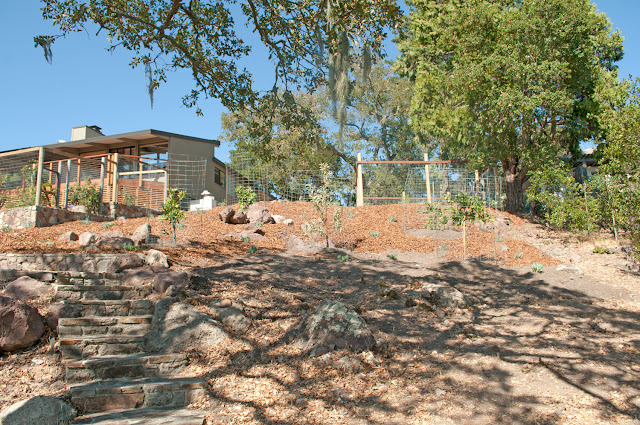 Below is my fortress vegetable garden! Still needs some vegetables and when I am finished reading my Vegetable Gardening for Dummies, there will be!

A close-up of the side of the house before: 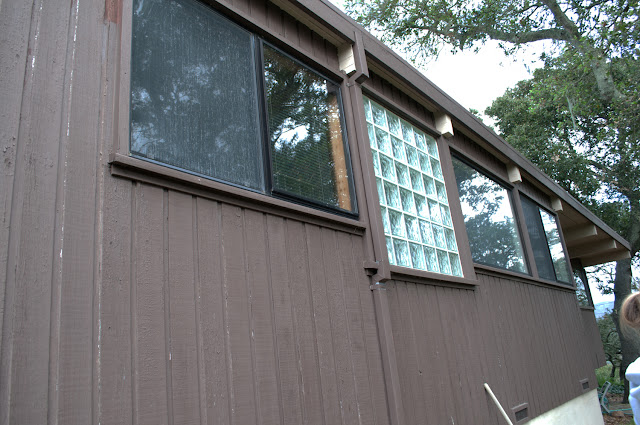 And after! What a difference. 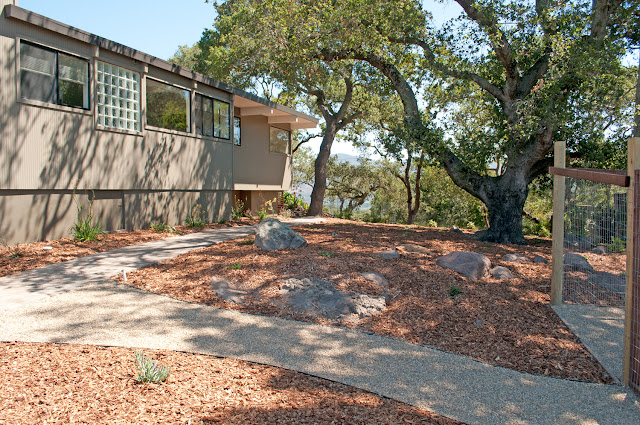 From front looking towards rear: 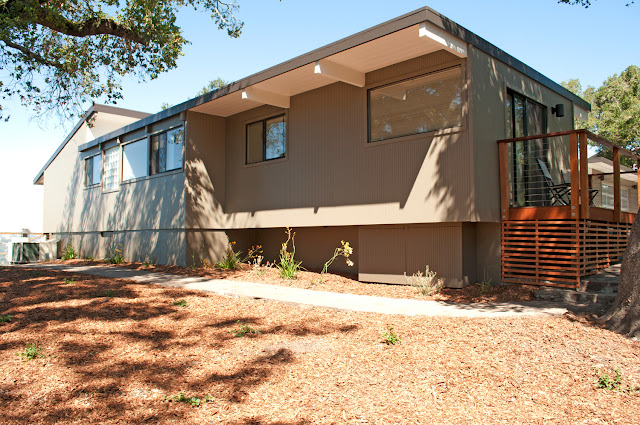 On to the back of the house. Remember this? We sure do! Between the rotting deck and the garden that was overrun with ivy and juniper, there wasn’t much to love. 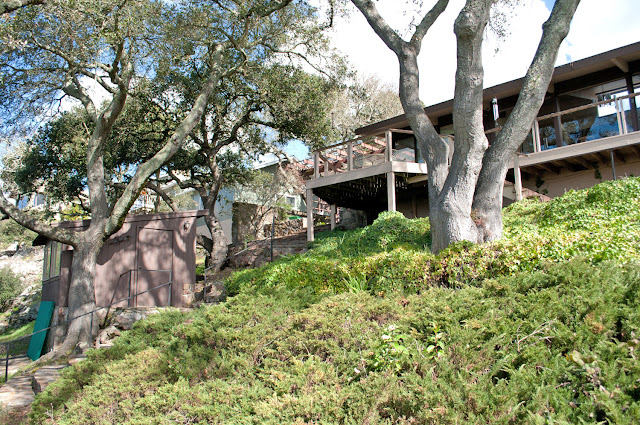 After:
Our Eichlerondacks found a nice home in this gravel sitting area we created behind a very old grapevine. 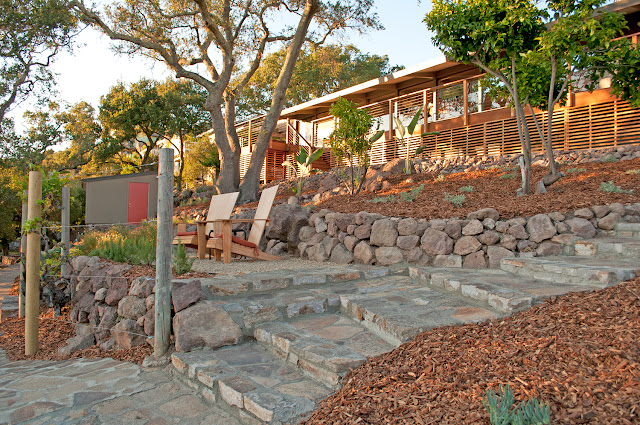 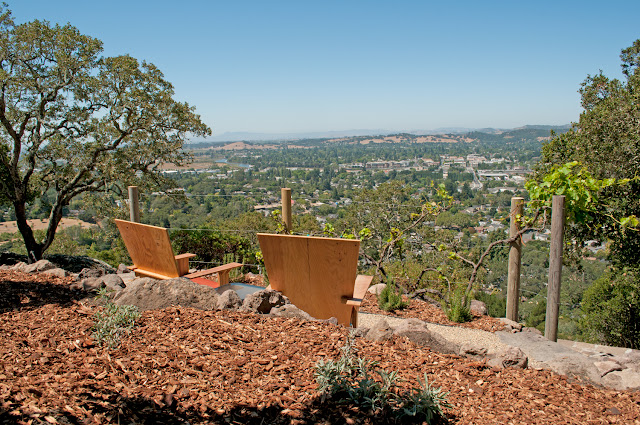 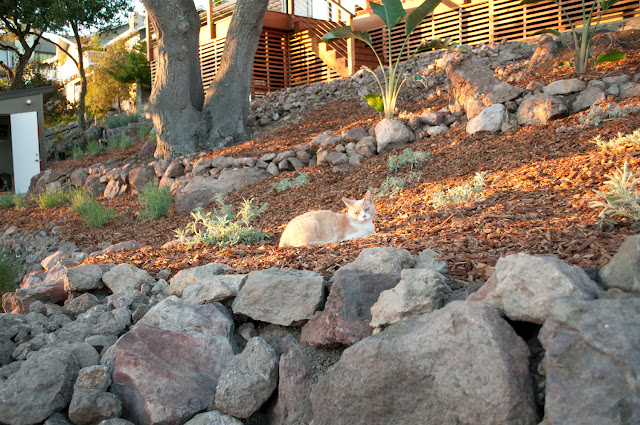 As you can see in this photo , getting rid of all the ivy and juniper uncovered a number of lovely native rock tiers. These were rebuilt up by us and our landscapers. Mexican sage, lavender, bees bliss and a few birds of paradise were planted. It’s become a hummingbird feast!
Another angle before: 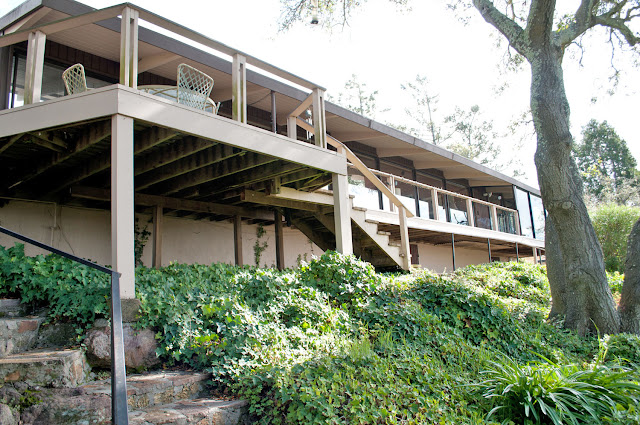 And here’s the after: 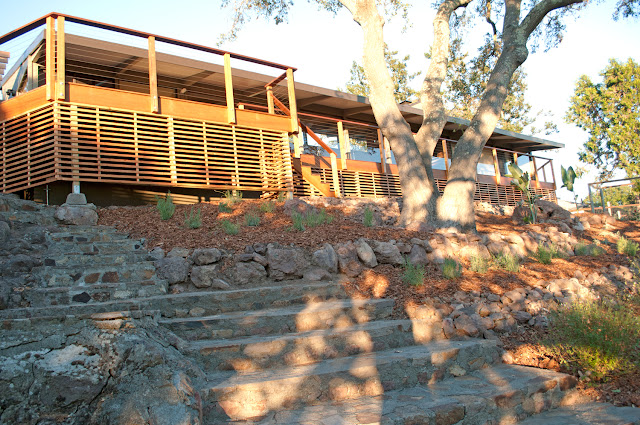 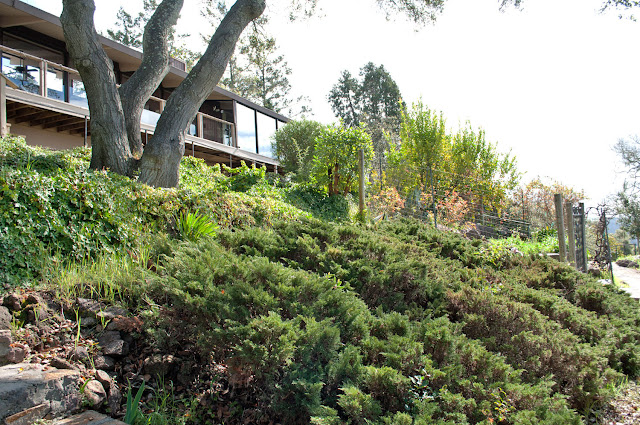 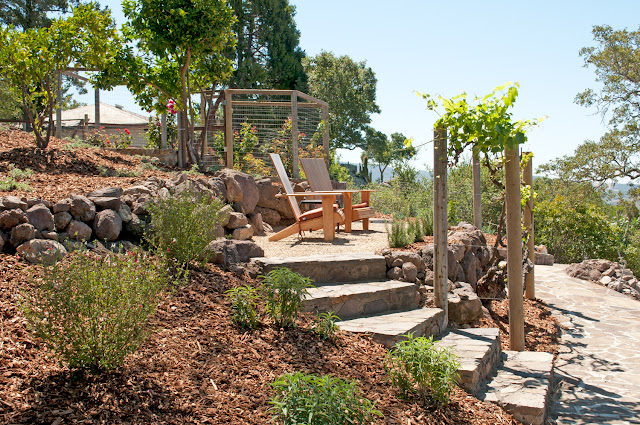 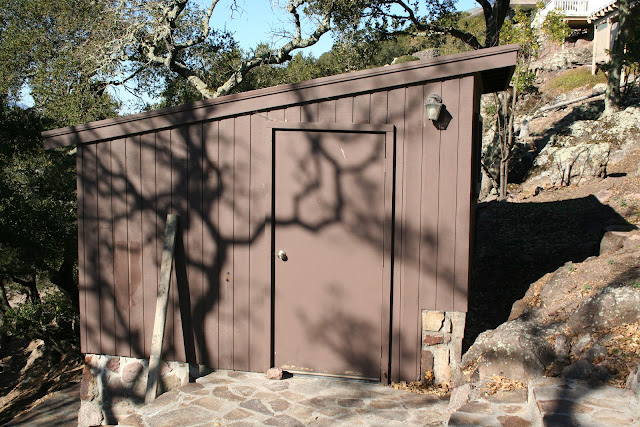 I referred to it as the spider shed, damp, moldy and full of spiders. 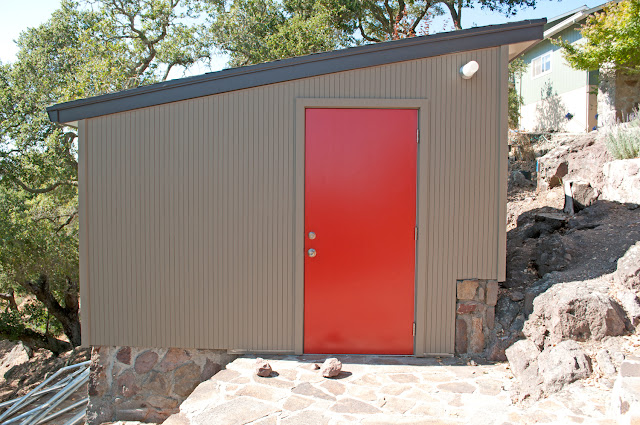 We  chose to do a mini version of the house – complete with orange door. That’s quite a difference! I still feel that something is missing, though. I would love to see an awning in the front, to give it some shade, and a window put in on the left hand side. Shawn loves his new office. And if I hear one more person refer to it as a man cave, I will throttle them.

Moving towards the north side of the house – the trellis before. Pretty but rotting. 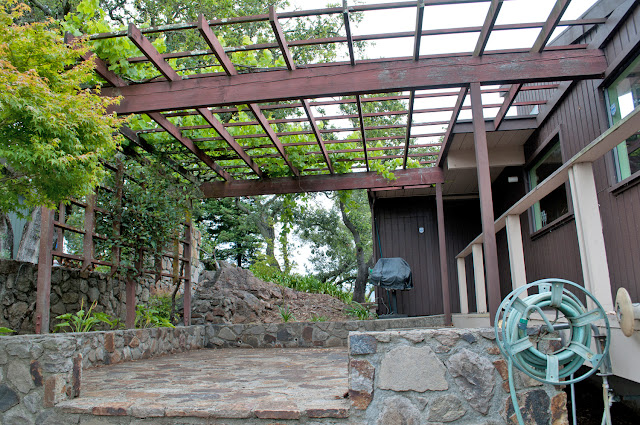 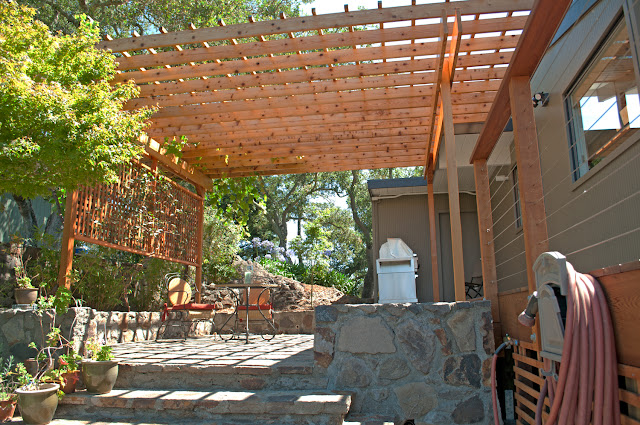 We had an entirely new trellis built. The sitting area is still looking a little empty because we just can’t afford a ton of outdoor furniture right now. And we do need quite a bit – for this area, as well as the back deck and front courtyard. Damn, we have a lot of space to fill! But for now, we have our cute condo balcany dining set for two.
Here is a shot of the rotting deck before: 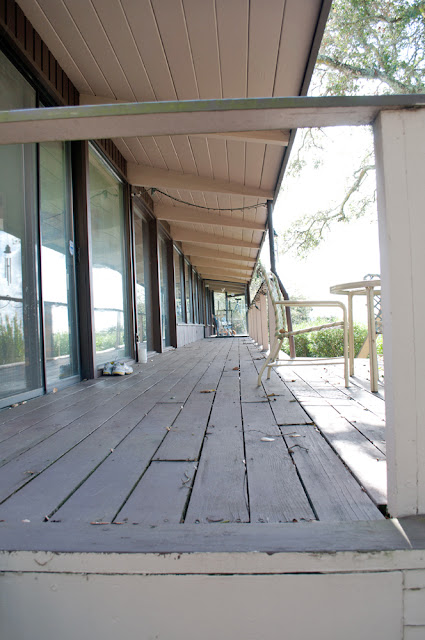 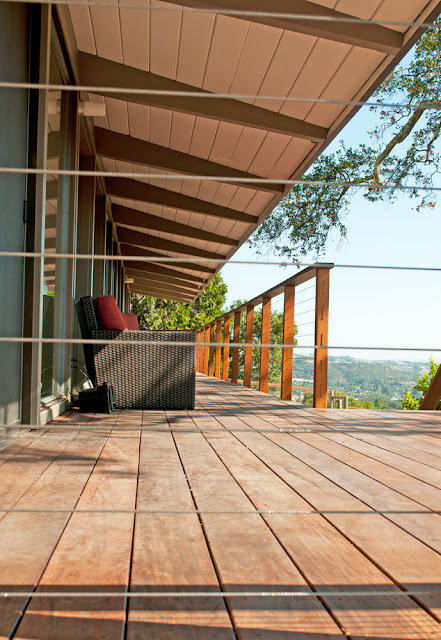 I think the painting of the beams and painting the underside white really makes the overhang ‘pop’.
Here is a view of the walkway in front of the deck before. This is when the atrium was still off of the bedroom and there was a ton of oleander growing too close to the house. 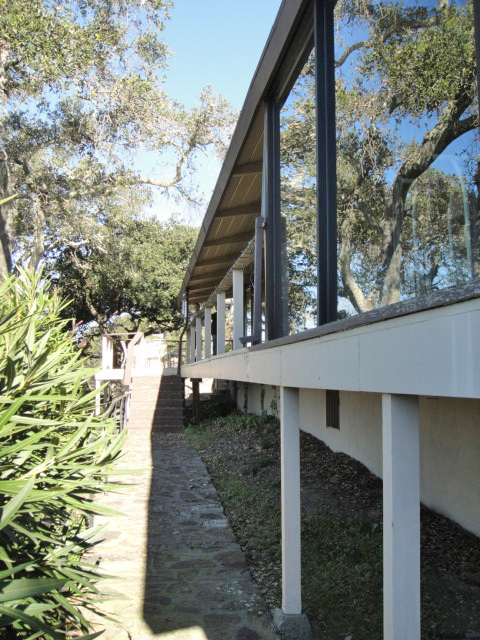 And here is the after. 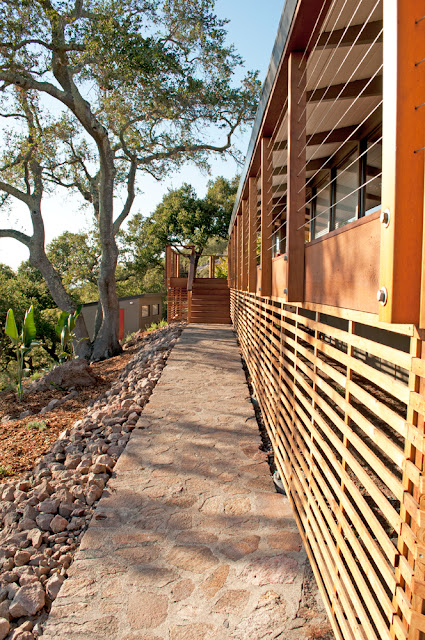 A rock wall was built up on the left side with native rock and lattice was installed below the deck to hide underneath. This lattice was originally a checkerboard pattern, with vertical wood pieces. But after we had it installed, it looked wayyy too busy. So Shawn pulled them off (my idea hehe). It’s not perfect, but it does the trick. And it was much cheaper than having them removed and replaced with more expensive horizontal lattice.

That just about completes the rest of the exterior of the house. As you may recall, the property further down the hill in the back was cleaned up (a long, manual 3 week process by a crew) 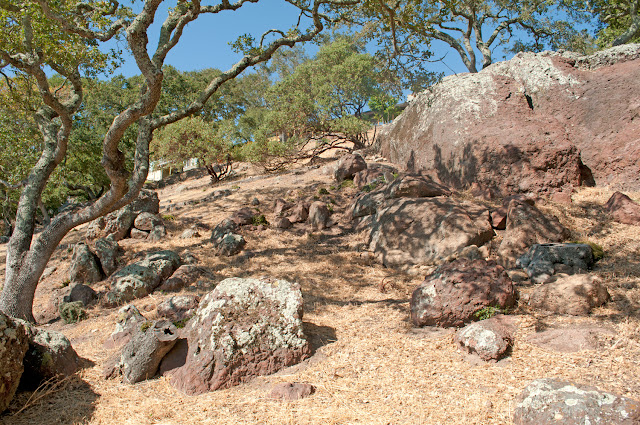 Hard to believe that is the exact same view, but it is! Look at all the lovely rock formations we uncovered! 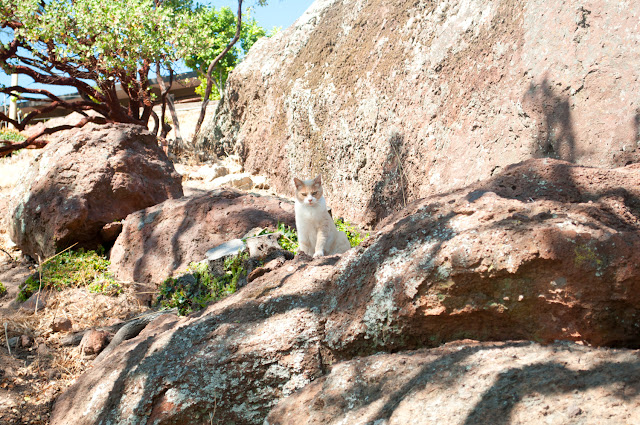 For more befores and afters, Go to my Flickr set