I just love before and after photos of homes, don’t you? Glad I took so many before photos now – even going back to before we bought the place. Almost two years later (yes, two!) it is amazing to look at the difference!
With the outside of the property, obviously it takes time for plants and trees to grow. So check back with me in 5 years haha! But taking care of the old oak trees through an arborist has already made a HUGE difference. We’re also really happy with how the steps have turned out. There is still a little work to be done which Shawn has been doing himself including filling in the gravel and finishing up the rock borders. This involves carrying buckets of of the gravel and rocks from the front of the property.
Come with me as I take you on a walking tour of the downslope:
Two years ago, we bought this overgrown jungle:
Before

What the hell were we thinking?!?!
Same spot now, (you can still see the manzanita tree in the middle). The tree to the left was diseased and was chopped down:
After 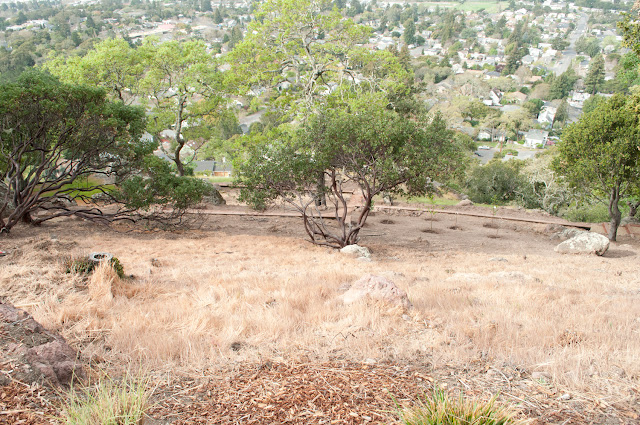 Next, we look to the left at the first sitting area. The approx. 150 year old oak tree was in a sorry state, as you can see:
Before 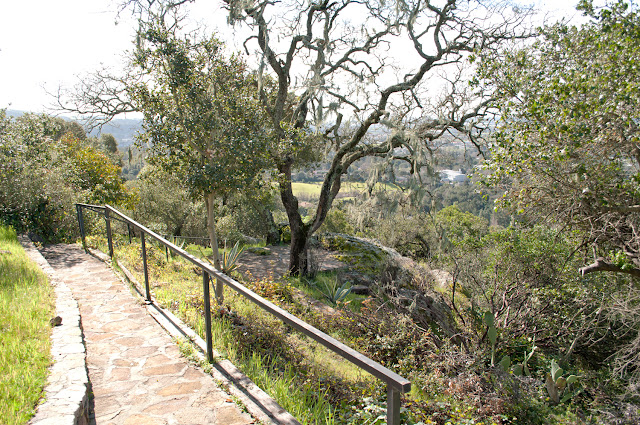 Walking towards the sitting area – it was covered in concrete, choking the trees. We removed and added gravel and bordered in the lava rocks that are all over the property. Plants are mexican sages and ornamental grasses. 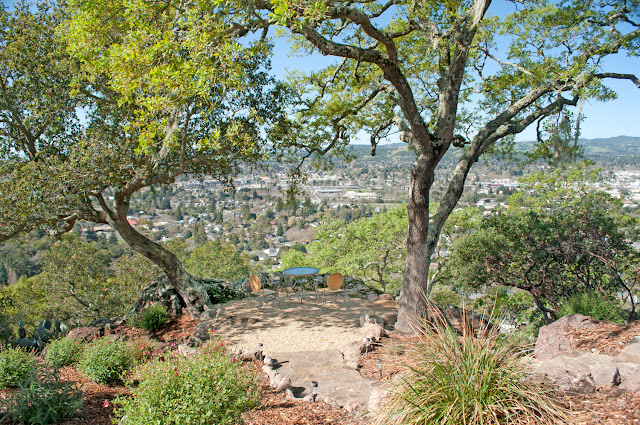 One of my favorite spots, can you see why? That is Mount Tamalpais off in the distance. On a clear day we can see the Sutro Tower and the Golden Gate Bridge! 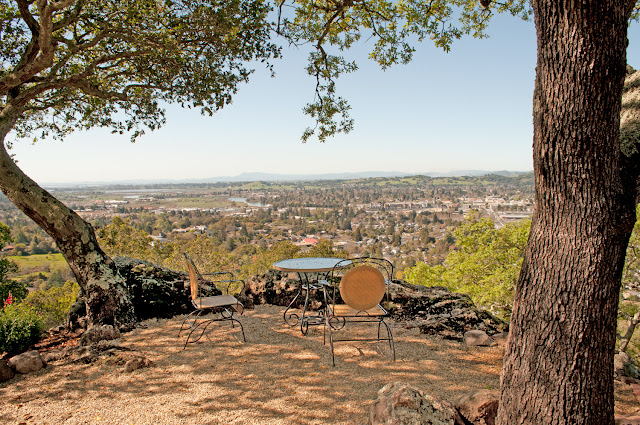 Moving on, these are the first set of steps leading out from the sitting area. 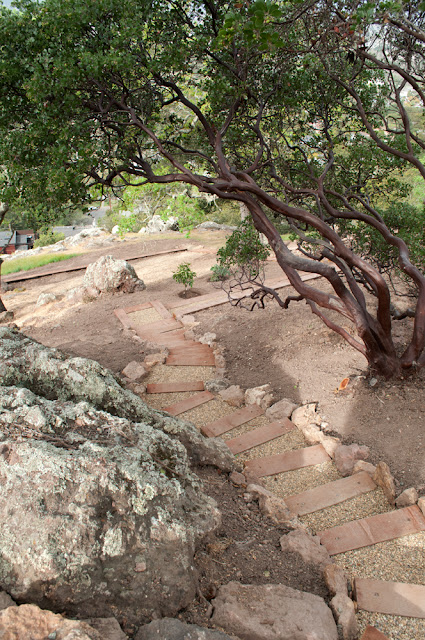 Previously, they were old railway ties that were rotting. I fell on my ass more than once!
Before, looking towards the sitting area from below: 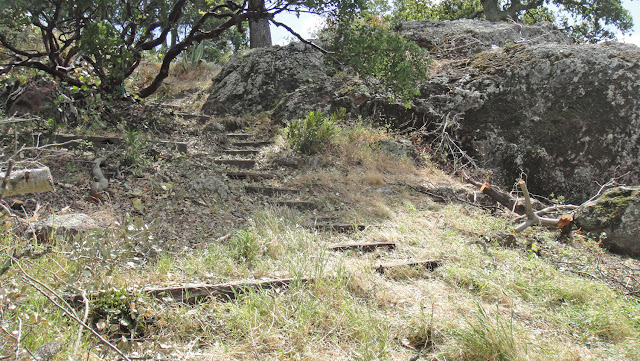 After with the first flat portion: 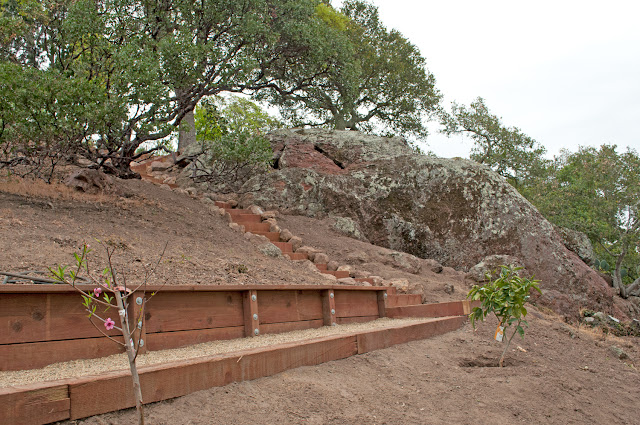 Besides becoming extremely regular, we may have to open a fruit stand.
(I’m pretty sure our neighbors are laughing at us planting all these fruit trees because of the deer. But Liquid Fence actually works if you are vigilant!)
Moving on, this is the bottom of the slope, looking up. And that was AFTER we had had some cleanup done!
Before: 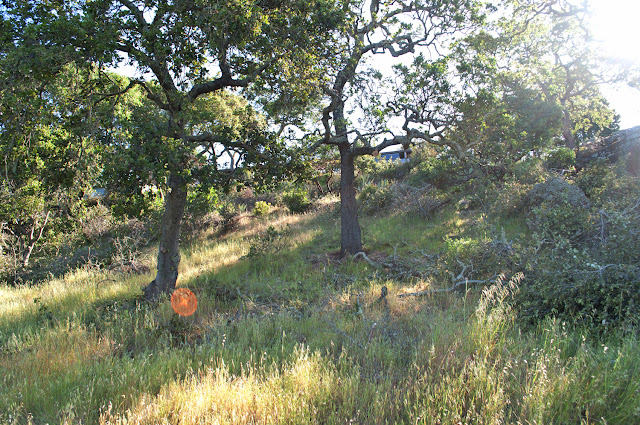 After we had everything cleared out in 2011, we uncovered all of the old railway tie steps:
2011 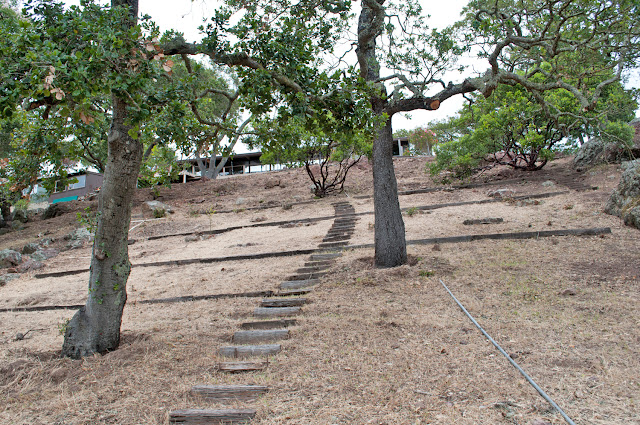 And here it is with the new steps and flat bits (props to the husband again for digging those out!). This side still needs the rock borders for the steps (go, Shawn!):
After: 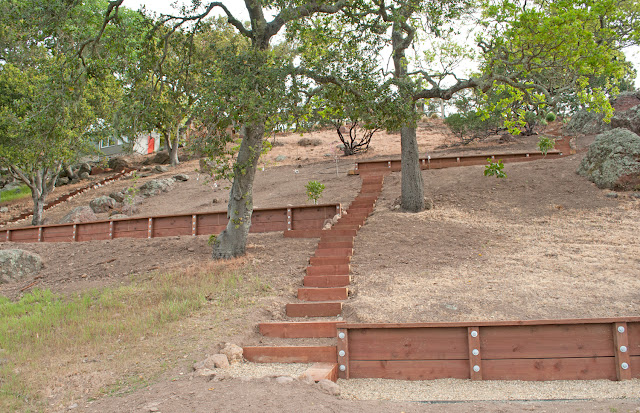 Amazing all of the huge rocks we uncovered, that were buried under ivy and god knows what.
Another view from the bottom of the slope looking north towards St. Helena:
Before 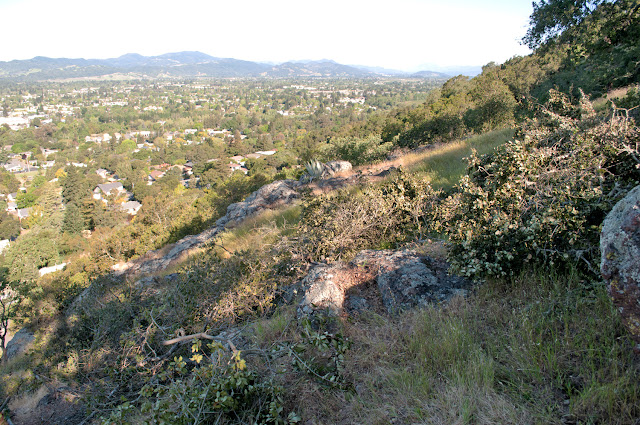 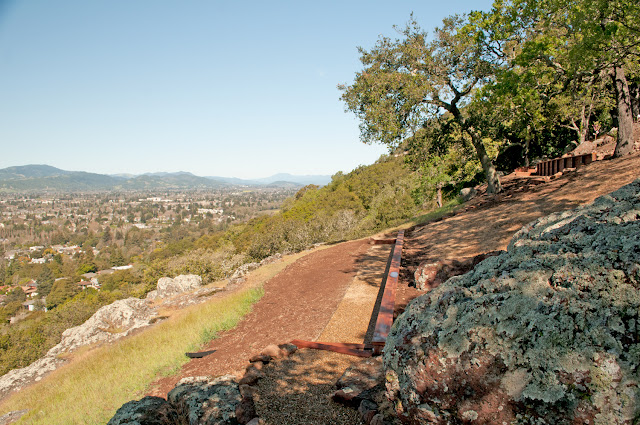 Perfect spot to listen to the rock concert that is coming to town in May. Oh yes, little Napa is having a 4 day festival called Bottlerock and we will be hearing it loud and clear up here. 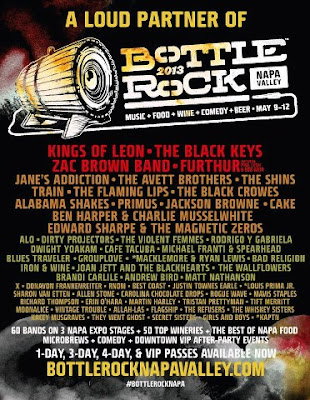 They are expecting 40,000 people over the 4 days and all hotels are already sold out. Some say it could be a huge clusterfuck. I certainly HOPE it goes smoothly, but traffic is definitely going to be a nightmare.

Back to our booty bootcamp – I mean down slope – moving on to the other side of the slope we have the third flat part, then a set of stairs up.

Did I mention this is a workout??? Shawn bordered all the steps with the rocks. We will be adding some ornamental grasses now that it is all cleaned out.
At the top of the steps, we weaved this portion through some of the boulders we uncovered: 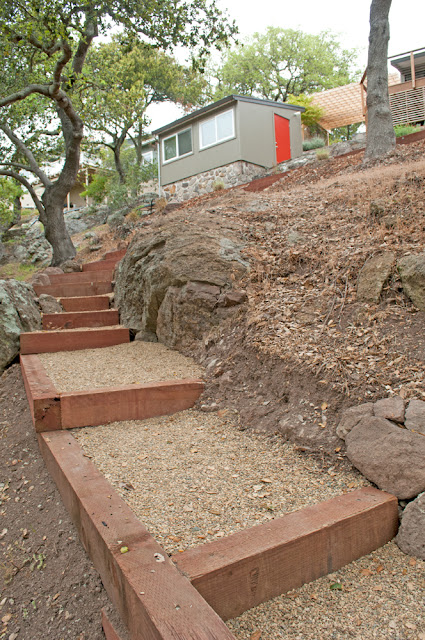 And some more straight steps back up to the top: 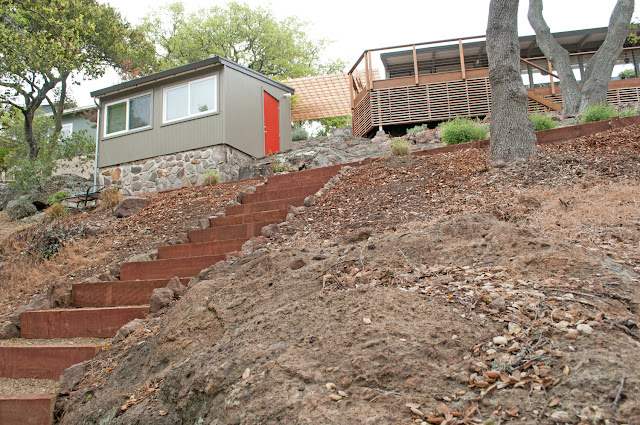 Here is a shot of the slope from this side, looking south.
Before: 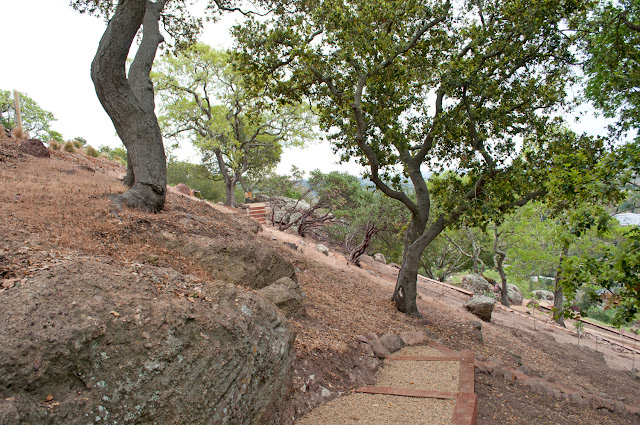 Geez, could I have picked a grayer day? Unfortunately our mornings have been a bit hazy.

Are you out of breath yet?!? To give you an idea of how much of a workout this loop is, come along with me if you dare as I videotaped myself doing it. Except that I sped it up, so that I sound like a chipmunk running on cornflakes. I’m twisted. (Sorry if this makes anyone dizzy!)

Tour of the Back from Michelle Egide on Vimeo.

8 thoughts on “The Downslope – Before and After Photos”