Welcome to the shiny new 657 Montecito! Phase 1 was completed 2 weeks ago and we’ve been spending some time vegging and enjoying hanging out at the house. I must say it’s been enjoyable not being woken up at 6am!
Thanks to Jeff Pratt of  J.P. Construction and his crew and Jose and Arturo of Tim Kerrigan Painting for all the great work they did.
I still have a lot of work to do with the interior and decorating. I’m not trying to rush it. I’m learning as I go along. Inspiration comes to me the longer I live here.
Let’s begin the exterior before and after house tour, shall we? I have a lot of before and after photos so for this post, I am going to show the front of the house only.
First of all, I love our new mailbox! They are imported from New Zealand. Isn’t it nice? Our mailwoman said we have the coolest mailbox on the block 🙂
This is the front of the house before. I never took a picture from the road, so I gleaned it off of Google Street View hehe. 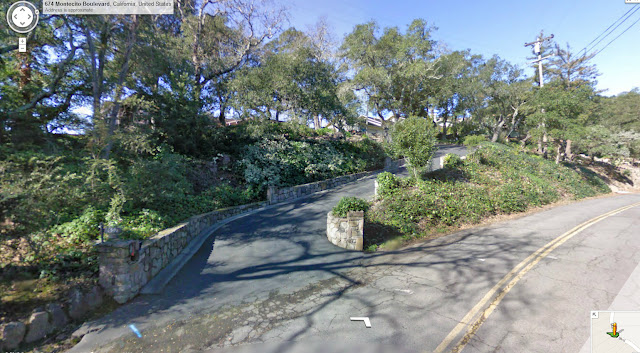 Ivy had overgrown just about everything. You couldn’t even see the lovely stone pillars.
After: 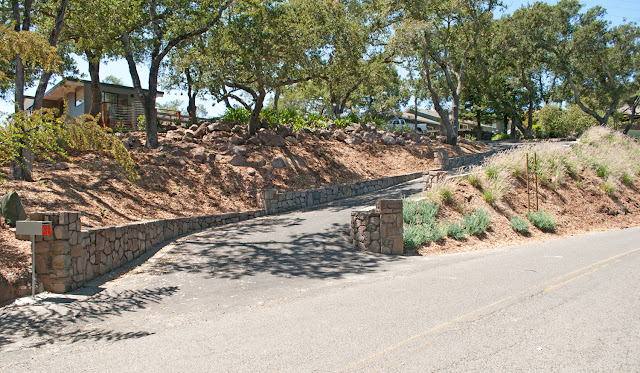 This was the front of the house before. That wrought iron fence was one of the first things to go!
Before: 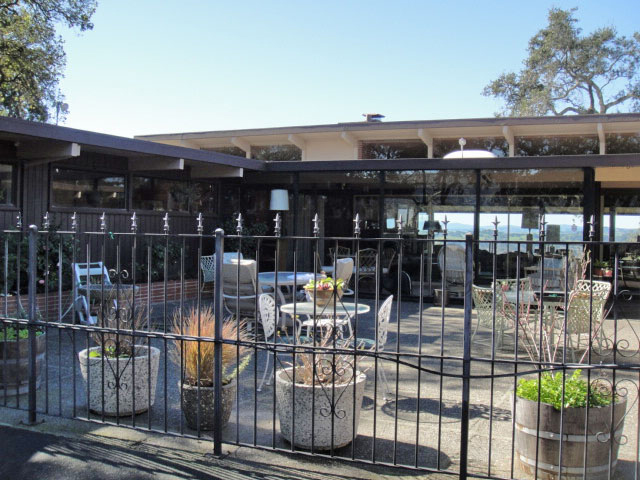 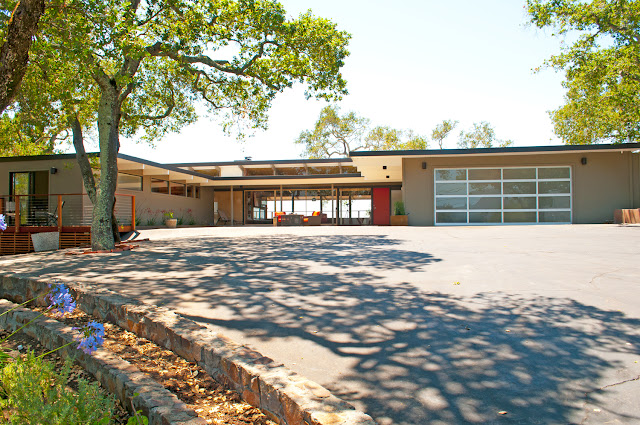 From further down the driveway: 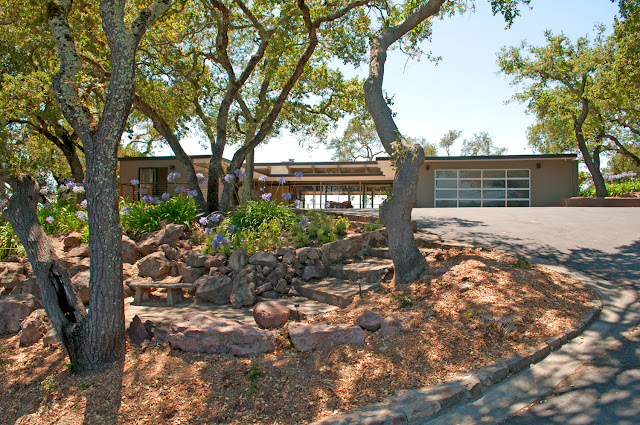 Quite a difference, eh?? New siding, outside lights, garage door, corten steel planters in the courtyard and freshly painted. To name a few things. Oh and we had the solarium removed from the courtyard area. 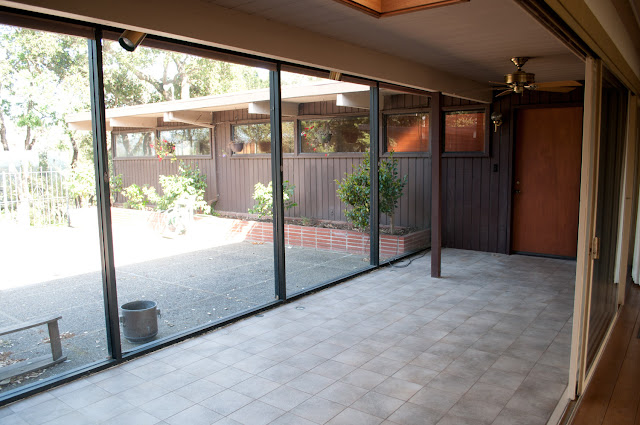 This was another utterly wrong addition done in the 80’s which did the reverse of what the house was built for – bringing the outside in as much as possible. Gone. For now, the floor is still there. Another Phase 2 project.

Another before of the rock garden in front: 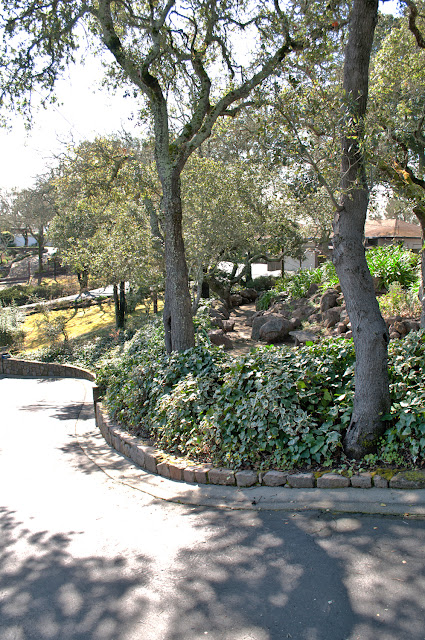 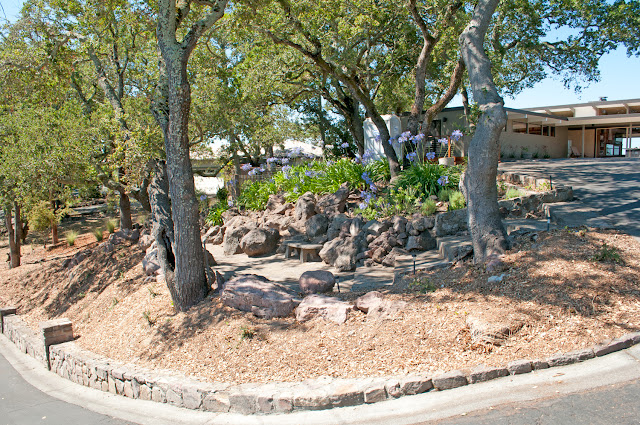 I just love this area up front. Our property has it’s own micro-climates. It can sometimes get very windy in back, while in front here, it is as calm as can be. It’s nice to sit on the concrete bench and read a book, while gazing over Coombsville.

Here is a closeup of the corten steel planter box in the courtyard. 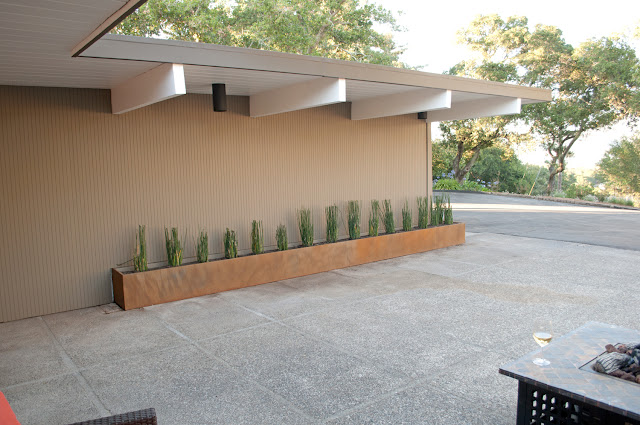 We planted horsetail on that side. (notice the wine glass? Perhaps the photographer was imbibing while photographing. When in Napa….)

We studied a lot of Eichler homes in Shawns old neighbourhood in Lucas Valley to decide on what colors and accents to paint. We painted a slightly off white under all of the overhangs and the beams in the front. It gives a nice clean look.
Here is another shot of the courtyard looking out towards the Coombsville region. We would eventually like to take out all of that asphalt in front of the courtyard and replace with gravel walkways and plantings. There is just way too much driveway for the 2 of us. We also want to fix up the courtyard further, but right now it’s cleaned up and suiting us nicely 🙂 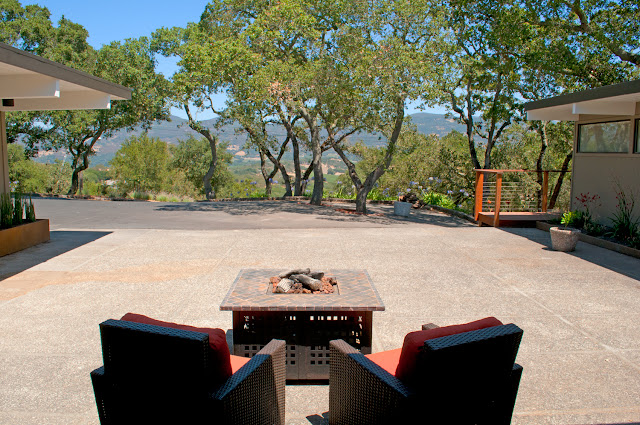 We planted kangaroo paw in the corten steel planter on the right.
I purchased the fire pit from Walmart! It’s terrific on a cool evening, as we so often have here when the fog rolls in over the valley.
Here is a close-up of the front door. 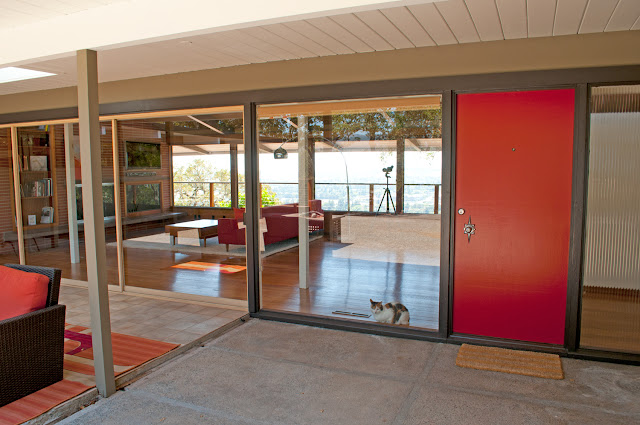 The  color is Benjamin Moore ‘Merlot Red’. It looks more paprika to me, but it is bright nonetheless. Love it. I’ve always wanted a red door. I feel very feng shui!
The door knob is from Rejuvenation. It matches the doorbell, also from them. I tried to incorporate these mid century modern touches throughout the house. Their mid century modern pieces are GREAT. Definitely worth the money, and the quality is excellent. 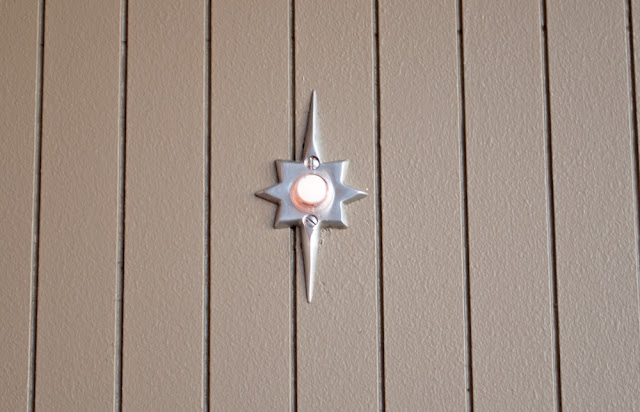 I have to say, the Eichler siding really made a HUGE difference with the exterior. It looks so much cleaner and modern. Thank-you to Bruce from J.P Construction – one guy and a ladder sided the entire house!
Here is a before shot of the front from the side: 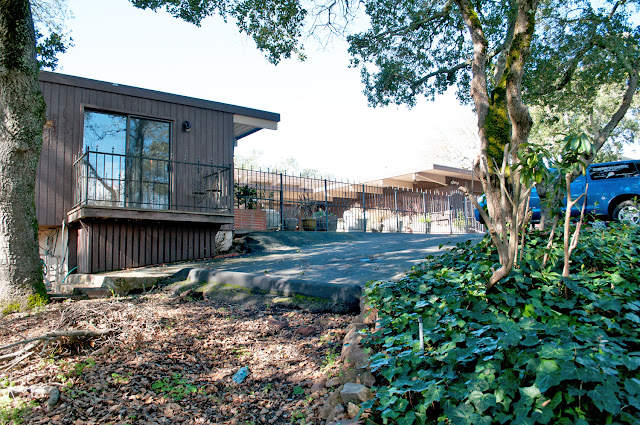 And after (now without the construction debris!) 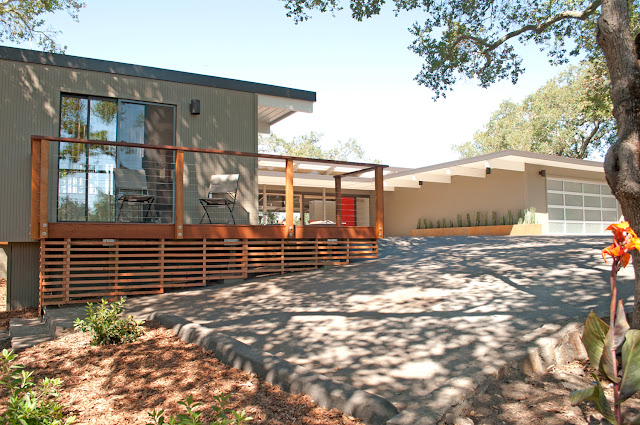 More plantings in the front. 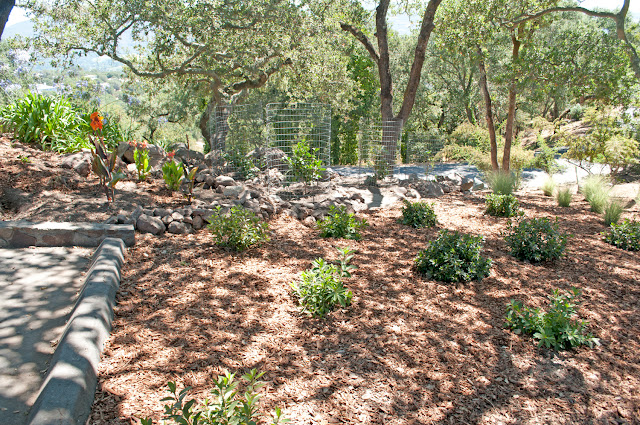 We planted camellias, azaleas, calla lilies, canna lilies, and some grasses. The agapanthus were already there and are in full bloom right now. 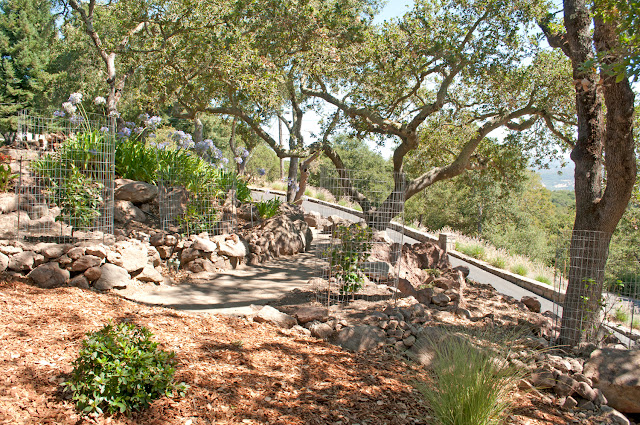 As you can probably tell, the landscaping was a huge undertaking for this property. We are very happy with how it’s turned out from the overgrown, neglected jungle that it was.