While I was playing with the teak dining table that we recently purchased, I found a stamp on the inside where the leaves are inserted.

So what or who is Moreddi? After some Google searches and research, I discovered this stamp comes from a store with an illustrious history in modern design in North America. Moreddi stands for ‘Maurice and Eddie’ Frank. It is not a furniture maker, but rather an importer. The brothers owned an iconic furniture store in Long Beach, Ca  called Frank Bros. They took over the furniture store from their parents in 1938 and decided to specialize in contemporary design. Frank Bros. was one of the first furniture stores in the US to import Scandinavian furniture.

According to this LA Times obituary for Edward Frank, who died in 2005:

Along with the retail outlet, Frank Bros. operated an import division called Moreddi that Edward Frank oversaw. His brother, Maurice, directed the retail business.To keep up with international trends, Edward Frank went on buying trips to Scandinavia starting in the 1940s and later to Milan, as well as to the showrooms of such California designers as the Eameses. Although the Franks were committed to contemporary furniture by architects, most of the inventory consisted of mass-produced contemporary designs made in Scandinavia. Frank’s passion for the field and his sophisticated tastes made Frank Bros. a magnet for architects, interior decorators and magazine editors. In the 1950s he was invited by John Entenza, editor of Arts & Architecture magazine, to furnish model houses designed for the Case Study Program that Entenza directed, to promote Modernist architecture.

The Case Study program (1945 – 1966) centered around Los Angeles and consisted of 36 prototype homes. It sought to make available plans for modern residences that could easily and cheaply be constructed during the postwar building boom. 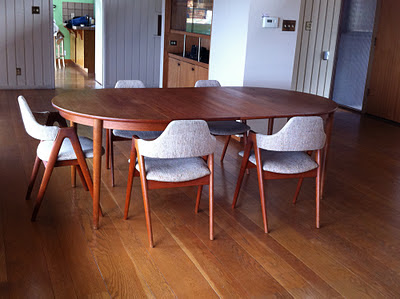 I also found fascinating that Edward Frank was born in Alberta, Canada – a fellow Canadian!

Frank moved to New York City about 1978 after Maurice died, and Ron Frank (Maurice’s son) took over the retail business, which he sold in 1982. Edward Frank worked for a few years in New York City for Dux, a Scandinavian import furniture business. He returned to Long Beach in the late 1980s and became a consultant for furniture manufacturers until he retired at about 83.

Ron Frank sold the business in 1982 to the Danica furniture company but retained ownership of the Long Beach property. Sadly, the building was torched during the Rodney King riots in 1992.

(Julius) Shulman, the architectural photographer who died last month at 98, was on hand to capture the Case Study houses inside and out. The photos gave Frank Bros. a wider audience, and brothers Edward and Maurice Frank, the owners, earned plaudits for developing a midcentury modern aesthetic that managed to be edgy but not cold or austere.

What an interesting life this dining room table has had! Part of the fun and mystique of buying older furnishings. I’m really enjoying learning more about mid century modern furniture and design.

Edward Frank believed in good long lasting furniture that could appeal to not just the wealthy but the every day middle class person. In his view, “furniture was like costly jewelry: One good piece made all the difference.”

(I’ve started a Moreddi group on Flickr, so if you have a Moreddi piece, please add it to the group!)

5 thoughts on “More On The Teak Dining Table”